Charlotte Marathon | Behind the Rebrand

“To be honest, I don’t really care that much about NASCAR. But Charlotte? I love my city.”

That snippet of conversation after a fall NoDa Run Club confirmed a recurring sentiment we had begun to pick up on. Thunder Road Marathon was Charlotte’s hometown marathon, but people weren’t treating it like that. Was it time for a change? With those thoughts swirling around our head, we met with race director, Tim Rhodes, and brand manager, Ashleigh Lawrence to tackle the question, “How might we encourage Charlotte to embrace the marathon as it’s own?”

If you haven’t noticed, Charlotte is growing, it’s identity is evolving and there’s infectious city-pride. Thunder Road had history, Charlotte runners helped choose the name 11 years ago. But the question remained, would a stock-car, racing theme provide the longevity and buy-in from the city to continue to foster an unforgettable race day experience? We left the meeting with confirmation. It was clear, a rebrand/renaming was in order. Hello, Charlotte Marathon.

A change this big wasn’t something we could take lightly. If it was really going to be Charlotte’s marathon we wanted to get some buy-in to the change. With pinky-promises not to leak the information, we set up meetings to pick-the-brains of Charlotteans we felt would have special insight into our project. We got to talk to some real rockstars in the Charlotte community (a huge thanks to National White Water Center, Charlotte Ballet, NoDa Brewery and#WeLoveCLT). The feedback we received was unanimous: “It’s about time.”

With a confirmed new name, it was time for a new look to match. Working within the idea of a stylized version of the Queen City’s crown, we focused on putting Charlotte’s identity front and center. 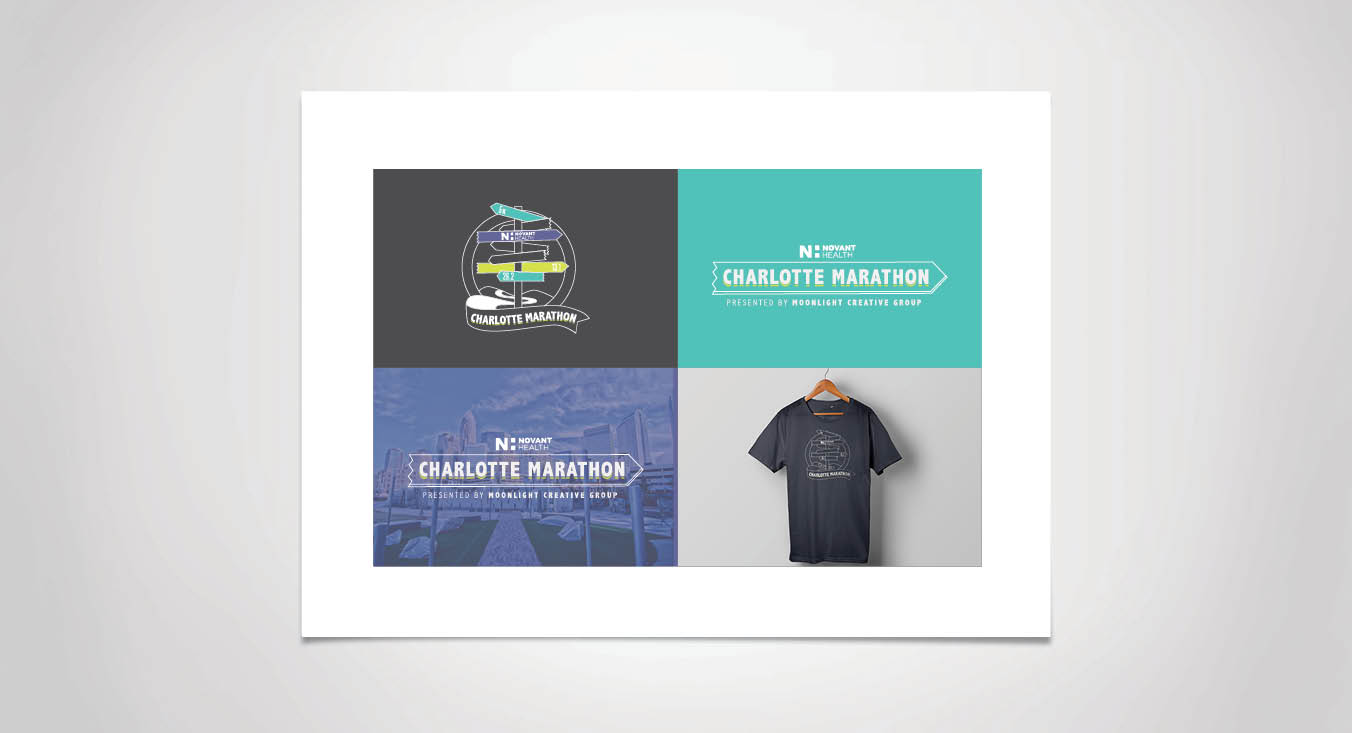 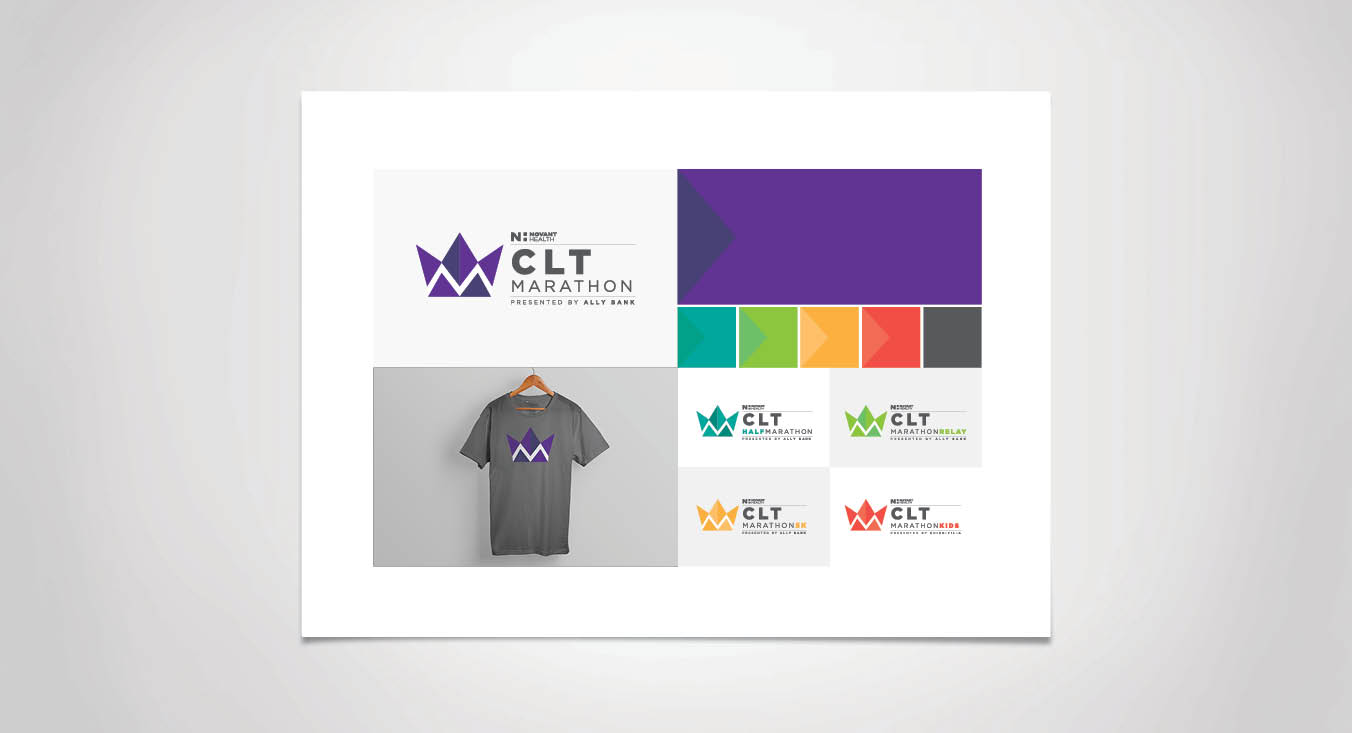 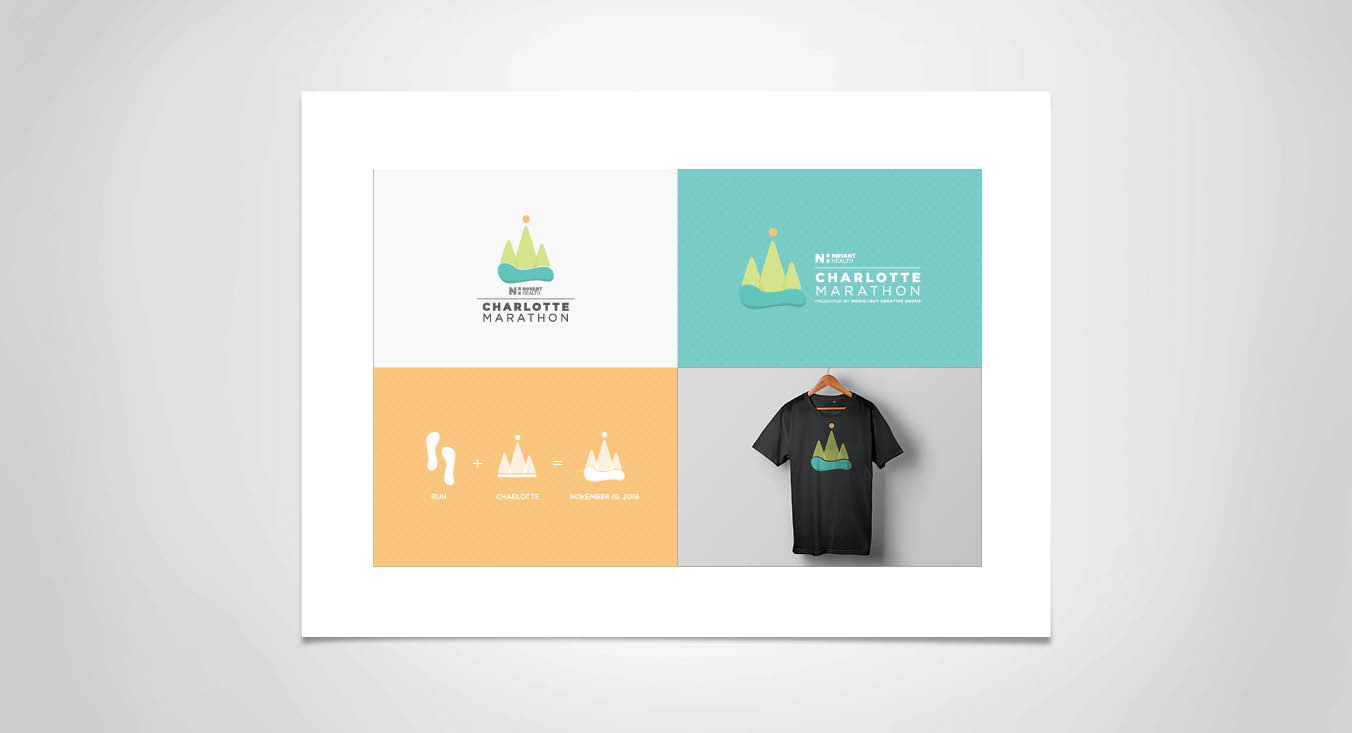 Part of any logo development process is refinement. We think logos should be a mix of design training, user-centered research and client feedback. Now, we don’t always get our client feedback in envelopes labeled, “Top Secret” with drawings from race directors, but when we do, we take pictures :) 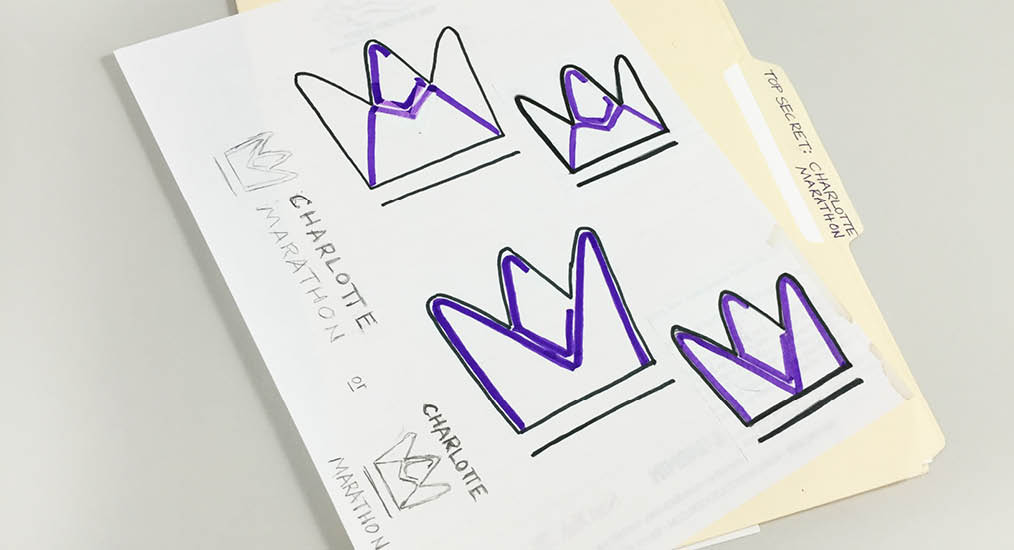 Taking into consideration Tim’s feedback, we reached a winner! 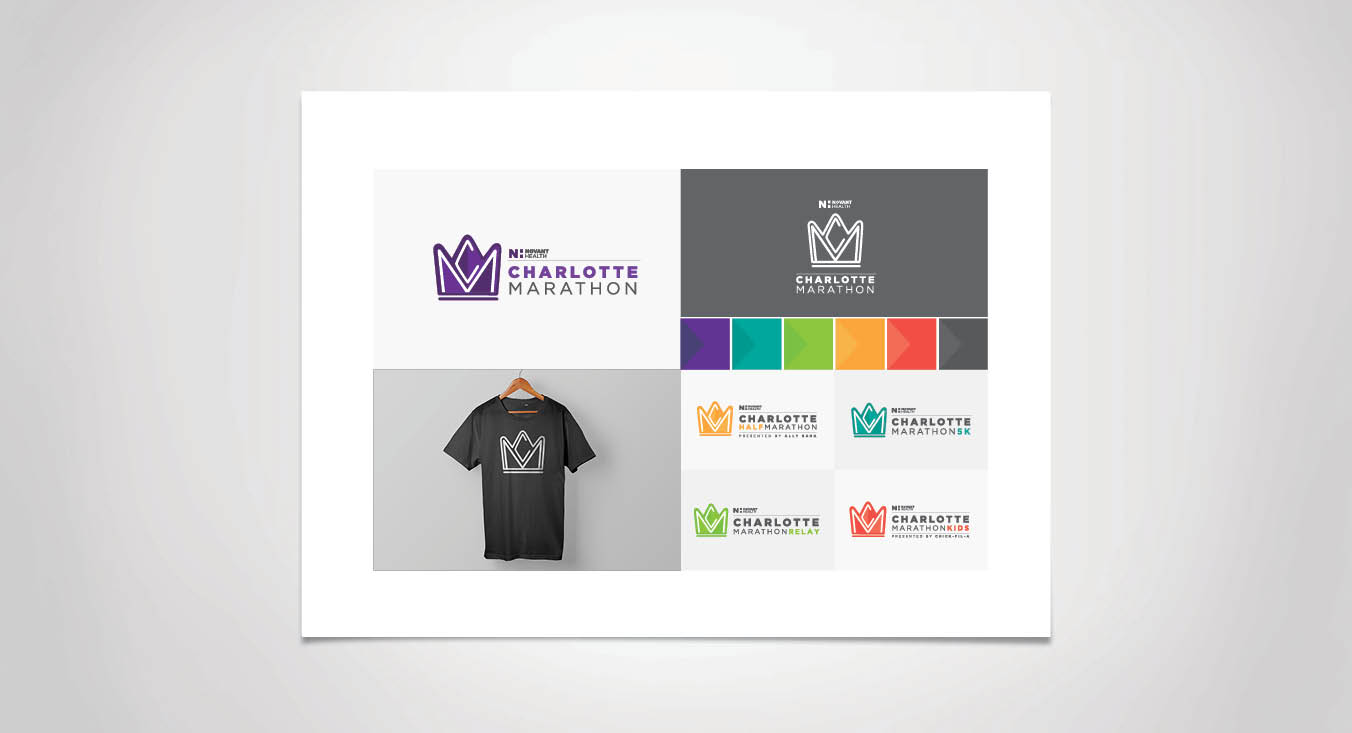 A new name and a new logo are nice, but refreshed aesthetics rarely shift culture on their own (we hear you Erin!). We knew launching the rebrand was our first public opportunity to start building community. With only a few months to launch, we mapped a multi-channel strategy to build buzz, including a new website, social media (including #WeLoveCLT takeover), video production and media relationship building. 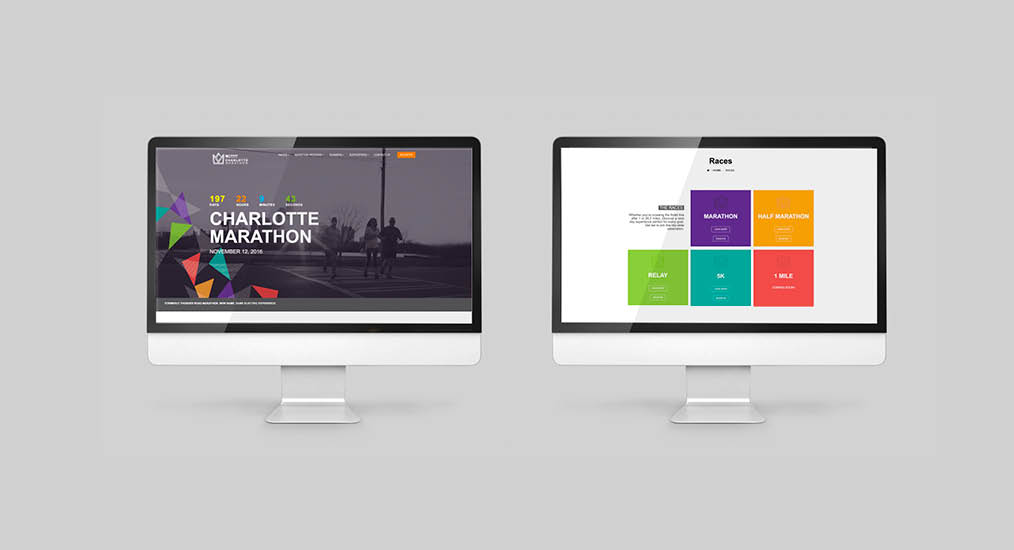 As soon as the news hit, the city (and respective media outlets) began talking. 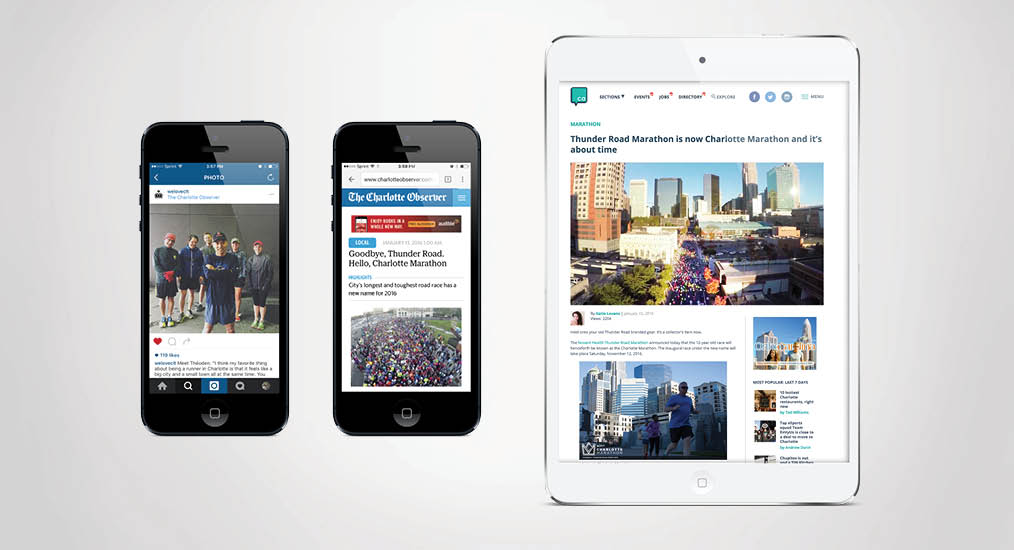 Beyond any buzz or media mention, ultimately, the Novant Health Charlotte Marathon is about people. Often all it takes is the right person to change someone’s mindset from “never!” to “Why not me?” With that in mind, we started building a rockin’ team of ambassadors. We kicked off the program by inviting well-known runners (and wannabe runners) from throughout the Charlotte community to join a Charlotte-centered movement. In exchange for swag, free race entry for up to 6 races, social media shout-outs and support, we asked our A-team to share their training experience in their own voice (on social media and in-person) and help plan one event leading up to the marathon. Our simple ask was met with community-wide enthusiasm.

With our initial list of ambassadors committed, we opened the program to the public for 8 additional ambassadors to join the crew. The application was simple. Post a selfie and answer the question, “How will you make the Charlotte Marathon your own?” 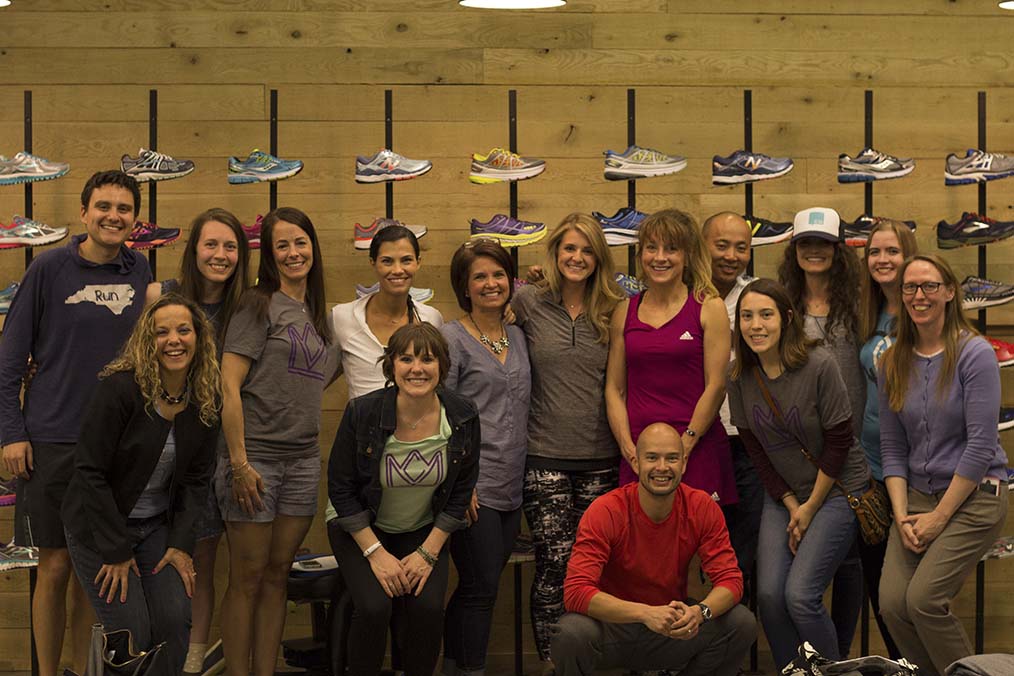 With events already in the works (and on the calendar!) we can’t wait to see how the ambassadors make the race their own and encourage others to do the same.

Now, whether if it’s as the design team behind the rebrand, an ambassador or a future runner, we believe that our anthem of “Our Streets. Our City. Our Marathon.” is one anyone can be proud to stand behind.